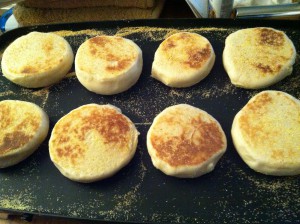 Cook half of the dough as English muffins and the other half as English-muffin bread!

Stir in enough remaining flour to make a soft dough.  Turn out dough onto a lightly floured surface.  Clean and grease bowl;  set aside.  Knead dough 6-8 minutes or until smooth and elastic.  Place dough in greased bowl, turning to coat all sides. Cover with a slightly damp towel.  Let rise in a warm place, free from drafts, until slightly more than doubled in bulk, about 1 hour.  Generously sprinkle cornmeal over 2 greased baking sheets; set aside.

Generously sprinkle cornmeal over tops of rounds.  Lightly press cornmeal into surface of each round. Cover rounds with waxed paper.  Let rise until doubled in bulk, 30 to 45 minutes.  Preheat a griddle or large heavy skillet over medium-high heat or, preheat electric griddle or skillet to 325 F.  Sprinkle cornmeal over griddle.  Do not grease. Bake muffins on hot griddle or skillet.  Use 2 forks to split muffins.  Toast before serving.  Makes about 20 English muffins.

I’ve had quite the time trying to come up with just the right texture and taste combination for sourdough bread.  You might think, “Hey, what’s the big deal?”, but it’s really tricky getting any bread to turn out consistently at this elevation and the precipitation plays a big part in that.

Whenever it rains, my oven takes longer to heat up, and bread may or may not turn out at all.  I’ll give you an example. [Here’s the recipe]

Once you have a healthy, refreshed starter (see recipe for “Sourdough Starter Refreshment”), the bread will take about 24 hours (over the course of two days) before it is ready for baking. It is best to start the recipe in the morning, no more than 12 hours after the last feeding of the starter.

I started baking Thursday evening about 9 p.m. or so.  I was supposed to mix some flour and some water into my starter and let it rise until doubled, “two or three hours”.

MAKE THE SPONGE: In bowl or container with at least 1-quart capacity, use rubber spatula to stir together starter and water until fully combined. Stir in flour until combined; mixture should resemble thick pancake batter. Cover with plastic wrap and let rise at room temperature (about 72 degrees) until doubled in bulk, 2 to 3 hours.

Now, mind you, there’s no commercial yeast in the mixture.  It’s just sourdough starter, flour and water.  I left it on the table to rise. It took all night and half the next day to double in bulk.

Then it got tricky.  I took my dough’s temperature. It was 68 F. I sat the dough on the counter until the next day before it had doubled in bulk.  It took me four days to make two loaves a bread!  I must be crazy.  The bread was good, but I don’t always have 4 days to wait.

I’ve got three recipes for sandwich sourdough bread, which is what I really want.  I love the taste of it, and it’s great as toast, which I love with eggs.  Just a few more months and I should have eggs from my very own chickens.

Shape into two 9×5 loaf pans.  Cover and let rise until double in size.  Bake at 350° for 25 minutes and remove from pans immediately.  Brush tops with butter.

Recipe: Grandma’s Oatmeal Bread
Time: 1:50 p.m.
Weather: Sunny
Temperature: outside 56°F, inside 76.5 F
Humidity: outside 82%, inside 45%
Barometric Pressure: 26.22inHg
Baking Time:
Baking Temperature: 375°F
Customizations: The oven was to be preheated to 375 F, but it takes awhile to up to temperature because I have a pizza stone in the bottom. So, I preheated it to 400 F, put the bread in and set the temperature to 375F.

The bread turned out perfect.

We are at 4,000 feet, and as you can imagine, bread can be more than a little finicky at these altitudes. As can other things. We are going to start with bread, and branch out from there.

I’ve decided to keep a log for the purpose of discovering what part, if any, the weather plays in baking bread, and if we can predict how the finished product will turn out.

We are going to track:

I’m resisting the urge to try to remember from today what the temperature was and all that. This should be a lot of fun and a nice experiment. I just love a good experiment.

I’ll be sharing some recipes, some baking tips and feel free to comment and ask question, we’ll learn together.